This summer you may find yourself in the place you’ve lived all your life feeling like you’ve explored everything there is to explore, or maybe you’re in a brand new place with endless explorations ahead and you don’t know where to start.

Either way, we guarantee you can find plenty of ways to make your summer fun fresher than ever!

Let’s start with you hometowners. Depending on the size of your city, it might be a challenge to find some new activities or sights for the summer and that’s when creativity is key. Become a “local tourist” to see your city through a new lens.

“Chase for an ace”

New in town? Don’t even know where the city hall is, or what it is for that matter? Fear not, this is 2018 and there’s an app for that. 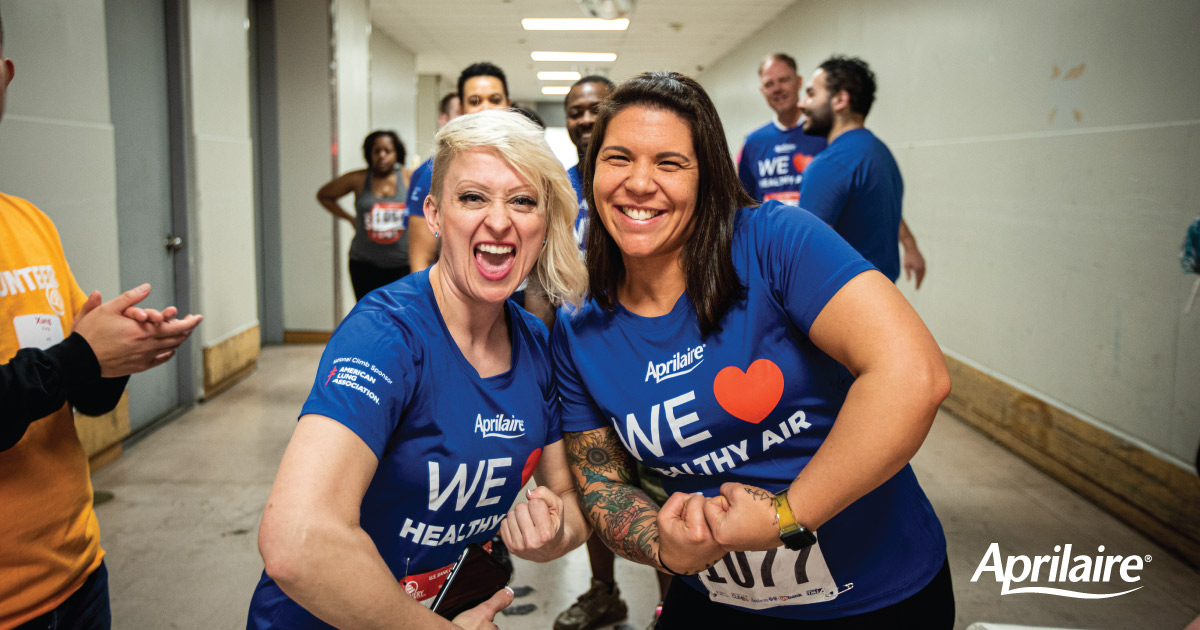 Experiencing the Fight For Air Climb

Before the Fight For Air Climb

Entering the US Bank Center for the American Lung Association’s Fight For Air Climb was a rush of energy.

This seemed less like an arduous trek up 1,000 stairs and more of an indoor festival. There were volunteers ready to greet you and pump you up for the ensuing climb and people from different companies sitting at tables ready to hand out souvenirs.

They were probably also there to distract you after you just got done instinctively looking up toward the top of the 47-story US Bank Center in downtown Milwaukee becoming a little uneasy at the prospect of your journey upward.

Before you made your climb, you gathered as a team and took several escalators down to the basement level before getting warmed up with a quick aerobic routine. Then you took a long and winding tunnel where you greeted by more volunteers who were cheering you on. It was hard not to feel inspired and excited.

During the Fight For Air Climb

One-by-one people took off up toward the top of the US Bank Center to begin their Fight For Air Climb. I, like most, started off confidently and quickly. I took the first six flights easily, but then by flight eight, I began to fight for air. I now understand why they title this climb just that. My mind and my body were at odds. I couldn’t decide whether I wanted to continue at the same pace to get it over with as quickly as possible or to slow down and feel better. I went with the former.

Everyone in the stairwell was trudging onward with the same dilemma. We all were gasping for air as we kept pushing up each step and each flight toward the top of the Fight For Air Climb. At several points, I wondered if I was actually making any progress.

Every 10 flights there was a group of volunteers handing out cups of water and words of encouragement. Both were sorely needed to help push me along.

After the Fight For Air Climb

Eventually, I reached the top after 9 minutes and 31 seconds. At the top of the stairwell, I was met by volunteers who were cheering me on and by other climbers who were also catching their breath and taking in the picturesque views of Milwaukee and Lake Michigan afforded to us by the tallest building in Wisconsin.

As I grabbed a water and walked around soaking in both the views of the city and my accomplishment, it was really cool to watch teams taking pictures together or greeting other climbers with high-fives and smiles. There was a certain camaraderie found in a common struggle.

Despite the lingering soreness, I cannot wait for next year’s climb. No matter if I beat my time from this year or not, it’s about fighting for air together and helping those impacted with lung disease.

To join an upcoming climb in a city near you, visit www.lung.org/aprilaire. 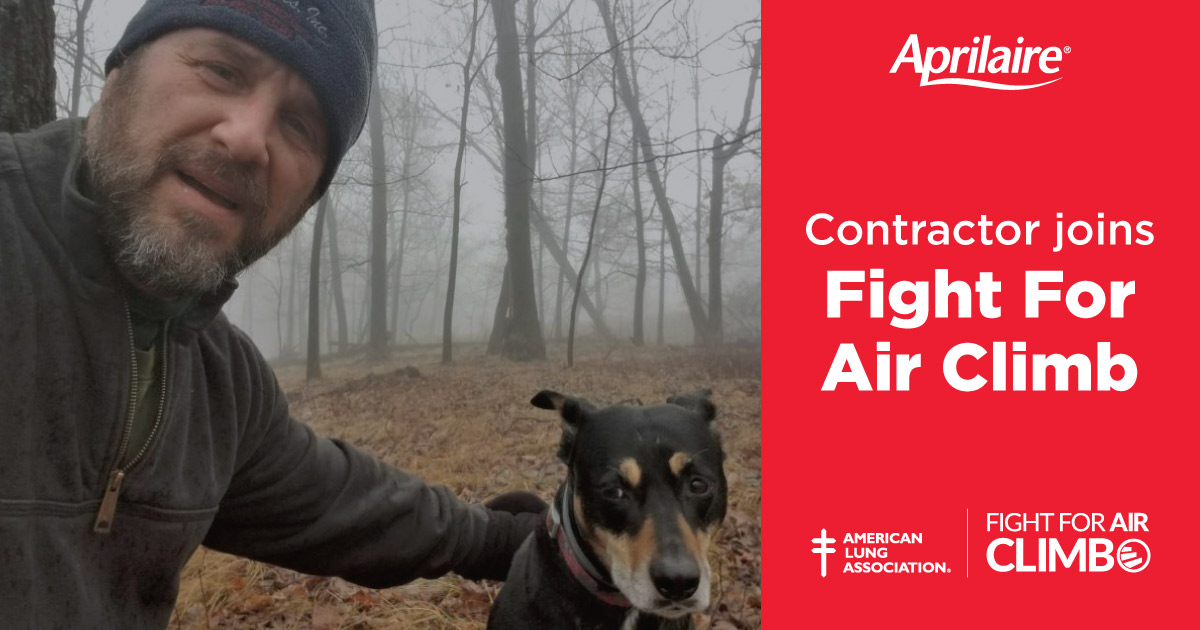 “What can you do or say when your family is suffering such losses? It’s devastating,” said Christopher Ciongoli, HVAC salesman/estimator with Aprilaire partner Whalen & Ives.

Chris is participating in the NYC American Lung Association Fight For Air Climb on April 4, 2020. When he heard that Aprilaire was the national Healthy Air sponsor of the event he signed on to the Aprilaire team.

“An opportunity to make difference just appeared to me on Jan 10th in an email from Aprilaire informing me about the Fight for Air Climb. This was it. This is how I would help make a difference and support my wife as well as so many others that are impacted by lung disease”.

As of February 7, he’s raised 90 percent of his fundraising goal. Not only is Chris excited to help raise funds and awareness, he told us he’s already reaping the benefits of training for the 849-step climb.

“My blood pressure has dropped, my pants are getting loose, and my dog Crosby is getting back in shape too!”

Every morning he goes out with dog Crosby and strengthens his legs and increases his stamina to make sure he can make it to the 44th floor of the 1290 Avenue of Americas building in New York City.

Read more of Chris’s incredible journey by going to his page. Thank you for your efforts, Chris and we cannot wait to hear more.

It’s Time to Care About Healthy Air
Breathe a sigh of relief. 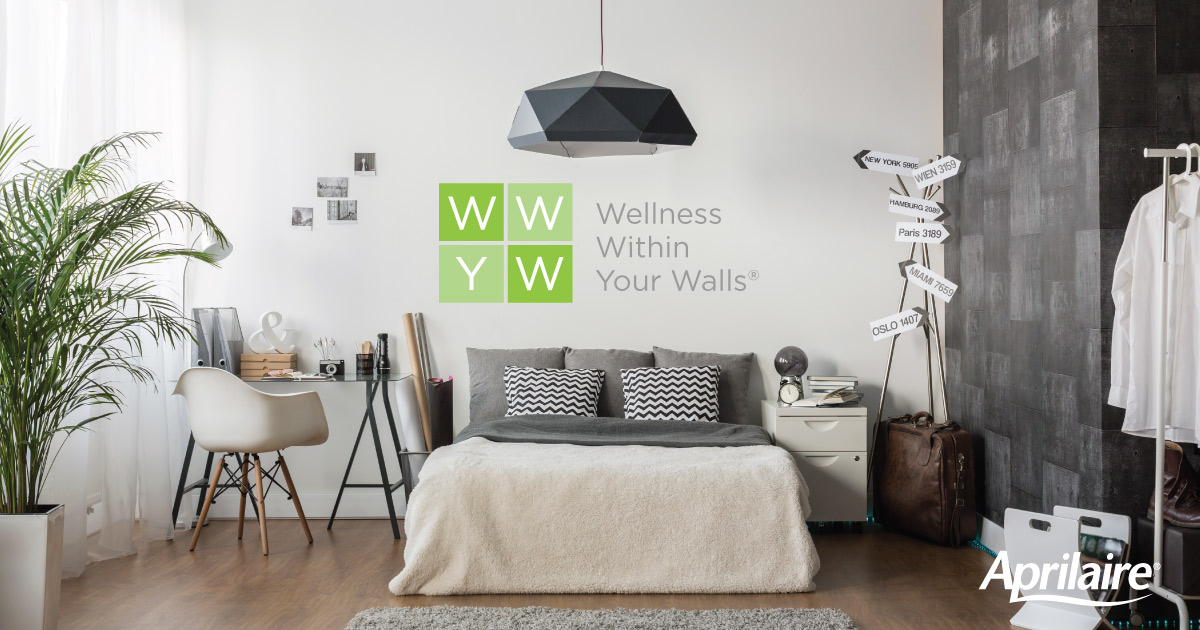 Aprilaire Partners with Wellness Within Your Walls

Aprilaire is the exclusive Presenting Sponsor for 2020 for Wellness Within Your Walls.

Wellness Within Your Walls (WWYW) is an award-winning education and certification organization which supports reducing and eliminating toxins in living environments to improve overall health and wellness.

The organization’s one-of-a-kind education and certification process enables consumers and professionals to increase awareness about toxins in building materials and furnishings and guide them toward making homes healthier.

Wellness Within Your Walls partnership for national campaign

WWYW will partner with Aprilaire to launch a national “Breathe Healthy” awareness campaign in 2020 to educate consumers, homeowners and the build/design community about the latest products and services that help improve air quality in homes.

“We believe everyone deserves to breathe healthy air, and we believe in the power of education,” said Dale Philippi, president of Aprilaire. “Our mission is to enhance everyone’s health by improving the air in their homes. We are proud to partner with WWYW– an organization building awareness with consumers and professionals about the importance of healthy air.”

“We are excited by our new partnership with Aprilaire. They offer products that solve multiple issues relating to affordable ventilation and humidity control for homes and we’re proud to work with Aprilaire to further elevate the dialog about health and wellness in living environments,” said Jillian Pritchard Cooke, founder of WWYW.

In addition to the “Breathe Healthy” campaign with WWYW, Aprilaire is the FY20 National Healthy Air Sponsor for the American Lung Association Fight For Air Climb events which support raising awareness of the importance of indoor air quality. The two initiatives will dovetail to further educate consumers and professionals alike about why healthy air – especially in the home, is vital for good health. Good air quality improves overall wellness, helps prevent irritating allergens and pests, and helps shield homes from costly damages.

About Wellness Within Your Walls

Wellness Within Your Walls® is an award-winning informational resource group created to provide education and guidance on chemicals commonly found in living and working spaces. With a goal to empower and guide consumers and professionals toward healthier living environments, WWYW certifies people, places, products and programs globally through education and health and wellness protocols. WWYW’s 10-step holistic approach, known as the Healthy Living System™, results in a legacy of health, harmony and sustainability in living environments. WWYW was founded by Jillian Pritchard Cooke, a 30-year industry veteran with experience as president of interior design firm DES-SYN and owner of the eco-living lifestyle boutique BEE. While designing Atlanta’s EcoManor in 2006, the first Gold LEED-certified single-family residence in the U.S., a cancer diagnosis became the catalyst for turning Jillian’s expertise into a passionate commitment to create healthier living environments by reducing toxins. Wellness Within Your Walls was born. The organization provides frequent and sought-after speakers at trade shows, educational opportunities, workshops, seminars and other industry events. For more information, visit: http://www.wellnesswithinyourwalls.com.