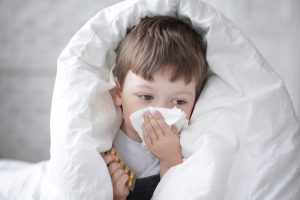 As fall approaches, more young kids could be heading to the hospital with severe respiratory illness. The culprit is a particularly brutal strain enterovirus. While it’s common for an enterovirus to circulate each year in the summer and fall, the number of confirmed cases of Enterovirus D68 this year is significantly higher than previous years, according to the CDC.

D68 is just one strain of a number of non-polio enteroviruses, with symptoms that range from mild to severe. Infants, children and teens are the most likely to become infected because they lack antibodies from a prior exposure. The CDC reports that mild symptoms of enterovirus are aches, fever, cough and a runny nose – similar to that of the common cold.

However, in severe cases, children infected with D68 have wheezing and difficulty breathing. These respiratory complications have led to an increase in hospitalizations as a result of this year’s strain. Children with asthma are at especially high risk for severe symptoms as a result of an infection.

Reducing the Transmission of Infections such as Enterovirus

This year’s enterovirus is just one of many airborne infections that may lead to absences for kids and adults. Enterovirus is predicted to taper off as winter approaches, but other viruses will be right around the corner.  Improving indoor air quality (IAQ) also helps keep your family healthy this winter.

An air purifier is capable of trapping 80 percent of virus-sized particles that pass through a home’s HVAC system. Since many seasonal cold and flu viruses are airborne, a whole-home air purifier may help reduce the transmission of the disease.

Another attribute of IAQ that could reduce infections indoors is relative humidity (RH). While humidity is often associated with comfort, virus transmission has been shown to increase in seasonably dry air. According to a report on the role of RH in the aerosol transmission of influenza, researchers concluded that “maintaining indoor relative humidity of greater than 40 percent will significantly reduce the infectivity of aerosolized [influenza].”